Handmade Hero»Forums»Code»Cool Tools
← Back to index
MrPhil
Philip Ludington
14 posts / 1 project
(tbd)
#5948
Cool Tools
4 years, 3 months ago
I watched Abner Coimbre's interview with Sean Barrett yesterday and he pointed out this webpage that describes the tools he uses: https://usesthis.com/interviews/sean.barrett/ Metapad was one I hadn't heard of and I really like it's Quick Buffers feature which is basically multiple copy-paste bins. 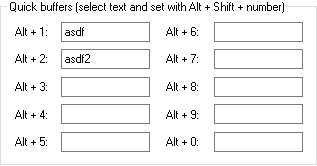 It makes me wonder what other cool obscure tools and features I'm missing out. Anyone have others to share?
MrPhilGames.com
mmozeiko
Mārtiņš Možeiko
2072 posts / 1 project
#5949
Cool Tools
4 years, 3 months ago
Emacs and vim have multiple clipboards since forever.

For simple editing stuff I usually use notepad2. It is much better notepad than Windows one, but still one single executable. Not as advanced as notepad++, but I don't need all the fancy features. Just basic syntax highlighting and few extra operations (like sorting, newline conversion & similar).

For more advanced code editing I use Far Manager. It is an orthodox file manager (look up in wikipedia what it is). You can look at it as IDE for files. It allows easy file management and also file editing. It includes many other more advanced feature - manipulating archive files, ftp/scp/sftp client, and many different plugins for other things. I use it for all my command-line work which includes C/C++ (and other language) file editing, compiling and running executables. I'm pretty fast in it, I can beat anybody who writes code in Visual Studio or any other editor in the office :)

I've used similar program also in DOS - started with Norton Commander, then moved to Volkov Commander and then finally DOS Navigator. Far Manager is best one on Windows. Students in informatics olympiads from former USSR countries and also Russia very often uses FarManger for writing code during the olympiad.

It can take a while to get good and fast with it, but I'm recommending everybody to try to use it. Only disadvantage is that it is Windows-only. It runs more or less fine under Wine, but that's not ideal.

Other useful coding related tools I use:
* ConEmu - Windows console replacement. Much better functionality. Main feature - resizable console window. It integrates very well with FarManager. It simply cannot stand using Windows without these two tools anymore (ConEmu and FarManager). It has also tabbed console windows, status bar, true colors and many other things if you like that. Also it has block copy&paste.
* Clink - hook into cmd.exe for bash style command-line editing/autocompletion. Much better autocompletion that default cmd.exe. Integrates well into ConEmu.
* hiew32 - Windows console disassembler, very nice tool to view contents of executable files - sections, symbols, imports/exports, and of course disassembly. Not free, but for me it was worth its price. Hiew was very popular in Russia cracking scene 20 or so years ago (not sure how it is now, probably everybody is using OllyDbg and IDA Pro now).
* the_silver_searcher - super fast grep in files.
MrPhil
Philip Ludington
14 posts / 1 project
(tbd)
#5964
Cool Tools
4 years, 3 months ago
Wow, lots of interesting thing new to me! Thanks!
MrPhilGames.com
Acry
Carsten Holtkamp
26 posts
#5965
Cool Tools
4 years, 3 months ago Edited by Carsten Holtkamp on Feb. 23, 2016, 10:52 a.m. Reason: typo
I use GNU+Linux all the time and I am only booting windows for gaming since you are kinda forced to do so, so clipboard managers plus source code are on board anyway.

How can someone be a low level coder if one only uses commercial, closed source programs?

Coding with visual Studio is horrible for me.

I did professional Microsoft windows server management and user training a couple of years.

There is one thing I'd like to recommend,
the command line prompt is aweful; hurts my eyes and breaks my heart :)
Try microsoft powershell, which gives you tons of missing features of the legacy cmd.exe.
It understands some unix command, has a acceptably command history/completion, has true type fonts, has a scripting language (with debugger) which gives you some bash like power etc.

Some people still think a "command line prompt" on ginux still looks like this:
https://en.wikipedia.org/wiki/Xterm#/media/File:Xterm.png

actually it looks more like this (if you want):
https://www.enlightenment.org/about-terminology
mmozeiko
Mārtiņš Možeiko
2072 posts / 1 project
#5970
Cool Tools
4 years, 3 months ago
Who is using only commercial, closed source programs?

And what's wrong with using xterm? I use xterm when I work on Linux. No need for anything else. All those fancy terminals are just an distraction for me. I just need unicode text output, scrollback and very rarely basic copy paste. xterm does all that for me.

As for powershell - ugh, I strongly dislike it. The commands are too long to type in. If I need real shell on Windows, I use msys2. It provides msys environment with real bash shell, nice terminal (mintty), real package manager (pacman) and many other useful packages like gcc, clang, coreutils and more.
Acry
Carsten Holtkamp
26 posts
#5971
Cool Tools
4 years, 3 months ago
You missunderstood me. That wasn't a response to your post.
I wrote "someone" not you :) It was just a general observation.
I thought this is a public forum and not I private talk.

Btw, I use xterm ~10h a day and it supports ttf, what the screenshot doesn't show.
I am on arch (pacman) and gentoo. So I have got:
gcc, gdb, clang, coreutils out of the box, plus source, plus debug symbols.

"Who is using only commercial, closed source programs?"
Many people do.

Still, MPS is far better than cmd.exe.
"The commands are too long to type in"
There is auto complete and aliases.

I never understood why people tried to make "their" windows more unix like :D I wouldn't try to make my OS more windows like.

And please don't just deny software cause it looks good or modern.
terminology is written by Carsten Haitzler.
He worked e.g. for Red Hat and is now at Samsung with his project.
https://en.wikipedia.org/wiki/Enlightenment_(software)
I really like it, codebase is in C. It is a fricking fast window env.
← Back to index Log in to reply